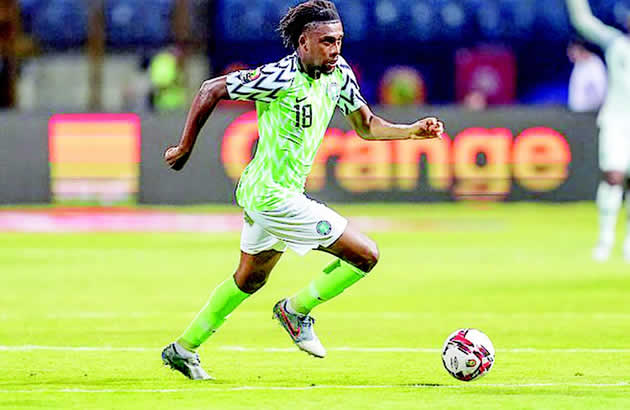 Officials of the Super Eagles team have questioned the COVID-19 test results of Alex Iwobi, The PUNCH reports.
The Everton forward missed Saturday’s 1-0 away win against Benin Republic after reportedly testing positive for coronavirus.
The 24-year-old, who was in line for his 39th appearance for the Eagles, was replaced by Galatasaray’s Henry Onyekuru.
A team official who spoke on condition of anonymity revealed that the former Arsenal forward will undergo another COVID-19 test today (Monday) ahead of Nigeria’s 2021 Africa Cup of Nations qualifier against Lesotho at the Teslim Balogun Stadium in Lagos on Tuesday.

“We will not accept the result until another confirmation in Lagos,” a team official told The PUNCH.
Iwobi, who has scored three goals in four appearances for the Eagles in five qualifiers, is doubtful for Tuesday’s clash versus the Crocodiles’ who are bottom of Group L.
Nigeria lead Group L with 11 points from five games and are followed by Benin Republic on seven points, while Sierra Leone and Lesotho occupy the third and fourth places respectively, with four and three points.
Copyright PUNCH.
All rights reserved. This material, and other digital content on this website, may not be reproduced, published, broadcast, rewritten or redistributed in whole or in part without prior express written permission from PUNCH.
Contact: [email protected]